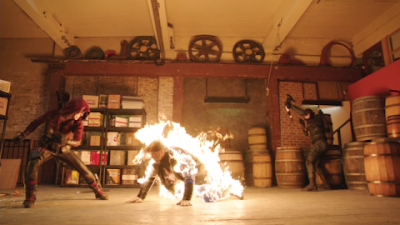 In 2000, Shawn met a local stunt driver who invited him to a movie set to watch an action sequence filming that day. Considering his background in various martial arts, the driver suggested that he look into stunts as a career option. After careful consideration, Shawn began focusing his training on Chinese Martial Arts, and Freestyle Acrobatics; as the landscape of stunt work in the west was becoming influenced by the introduction of Honk Kong-style action by such names as Jackie Chan, Jet Li and Yuen Woo-Ping.

In 2003, a significant influx of high-budget US film productions rolled through Vancouver, Canada. Shawn was able to attain employment on various projects such as John Woo’s Paycheck, Alex Proyas’ I, Robot and David S. Goyer’s Blade 3, to name a few. From there, his career continued to flourish. He had acquired the opportunities to Stunt Double for such notable actors as Matt Damon in Neill Blomkamp’s "Elysium" and Andy Serkis as “Caesar” in Matt Reeves’ "War for the Planet of the Apes."

As Shawn’s film career continues, he has now set his evolutionary direction towards the area of stunt and fight coordinating and is excited to continue his journey as a Hitz member while expanding his horizons on the international stage.